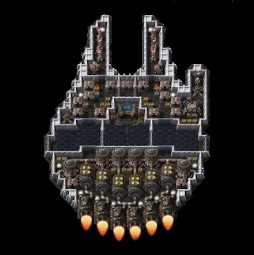 This week ironic toblerone takes us on a crazy adventure into space featuring the fantastic Space Exploration mod by Earendel. Suit up and strap in, this is a fun one!

Space Exploration is an overhaul mod that takes you on an epic journey through the stars. It’s packed with new challenges, original mechanics, and unique experiences. This is my story.

I launch a rocket to deploy a satellite, allowing me to see the world in satellite view, detached from my body. My quest to find the edge of the planet just got a lot easier and… yup, there’s the edge. Nauvis has a limit.

But what’s this? My satellite also discovered something abandoned in my planet’s orbit. I can look at it with the satellite; it’s some sort of space platform with some treasures I might want. You know what that means: time to go to space in person. 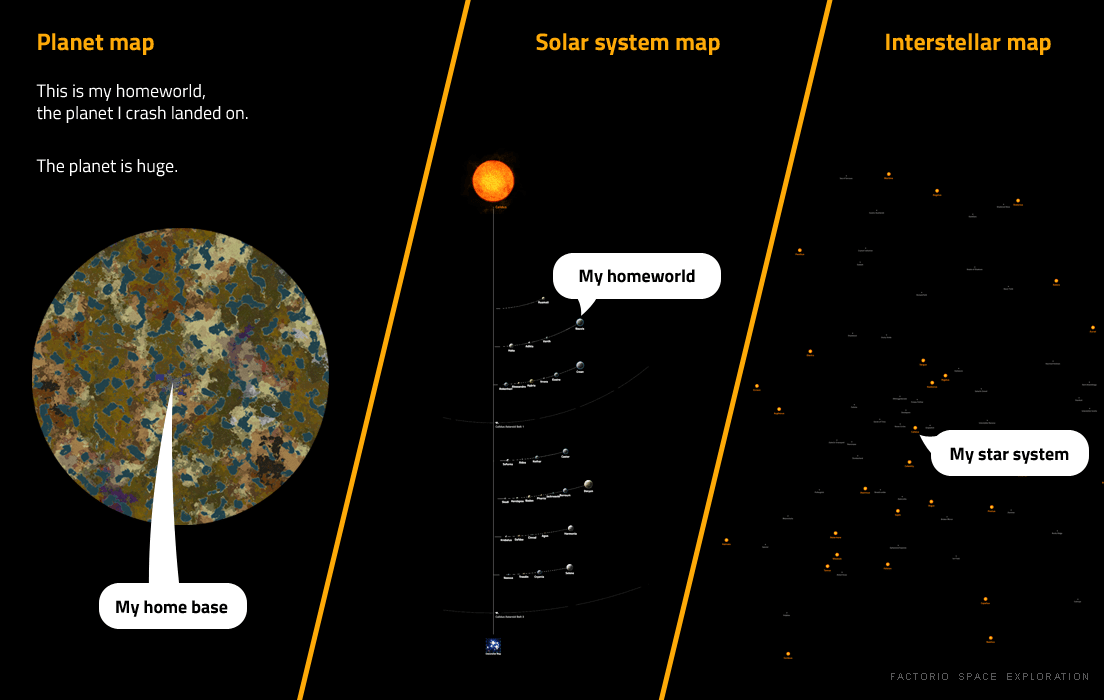 I build up my base and construct a cargo rocket full of materials, jump in and hit launch. Riding the rocket is a rush, and the feeling of floating around in zero-g is magical. The magic is short-lived though; in orbit, you need to bring life support, and without precious O2, I die. I hit respawn. Death is not so bad after all it seems. 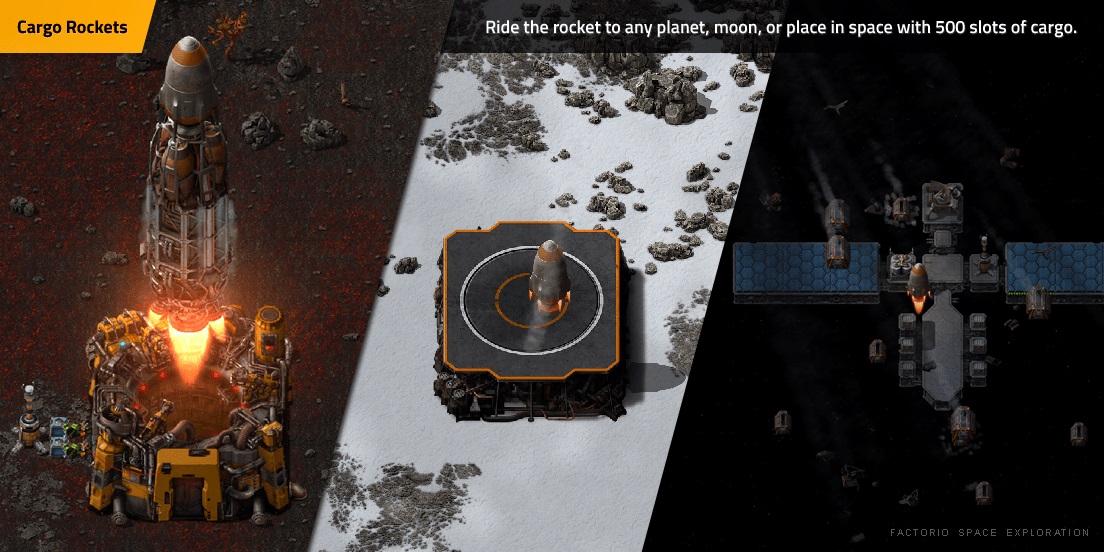 After making a new production facility for a thrustersuit and lifesupport canisters I make another attempt. I make it to space and start building my space station, trying not to cry at how expensive scaffolding is. I get to work on the first and simplest of the in-space sciences: rocket science. It’s much more complicated than any of the science packs so far, but much easier than everything to come, as I will realise soon.

At first, it is a bit surreal having two completely separate bases running at the same time, but I can look back at my homeworld at any time using my satellite, allowing me to order more resources to be delivered via the cargo rocket, stamp down some blueprints, copy paste things for the bots to do, even change recipes and wire things together.

With rocket science (semi-)automated, it is time to look at the new tech I have unlocked. There are four data-driven sciences to choose from, and they’re all pretty complicated. Each one poses a different type of challenge, requires specific machines for experiments, and needs a resource I don’t have. 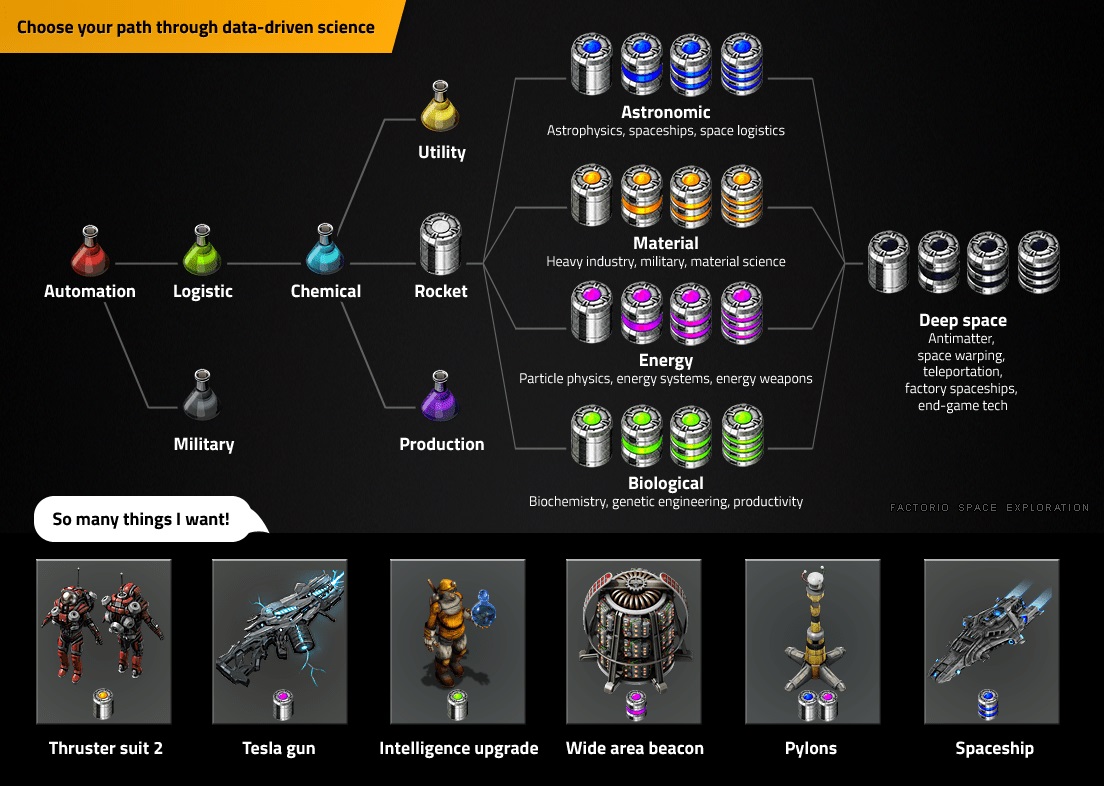 Energy science looks like a solid first choice. I would need to find a new metal called holmium from some other planet, then figure out how to make some huge particle colliders and energy streams to produce the science. It would, however, unlock things like the tesla gun, those sweet flat solar panels you can run on, power pylons, and the game-changing wide-area beacons.

Or maybe material science would be the better choice. For that, I’d need to find some iridium, and the science experiments would generate a lot of scrap that I’d need to process. This would get me an improved space station floor, military upgrades, and a spacesuit with a bigger equipment grid.

Perhaps bio science would be the most efficient first choice. I would need to find some weird material from another planet called vitamelange and figure out how to do genetic experiments. It would get me the bio gun, spidertron, bio upgrades, and greater productivity to save me resources overall.

No, I know what I want. There it is, deep into the astronomic science tree: the spaceship tech, fulfilling my dream of being a spaceship captain. Astronomic science needs me to make a lot of telescopes and requires beryllium, which I’ve only seen in an asteroid belt so far. Unfortunately, the spaceships themselves require a lot of other science to be carried out first, which will take days. These preparations would get me rocket safety upgrades along the way, which is nice, I guess. Not crashing is good, but with the moons I’ve already found, going for the other sciences would be far easier.

I take a look at the other techs tempting me, which is when I notice that energy science provides me with space trains! So many decisions. 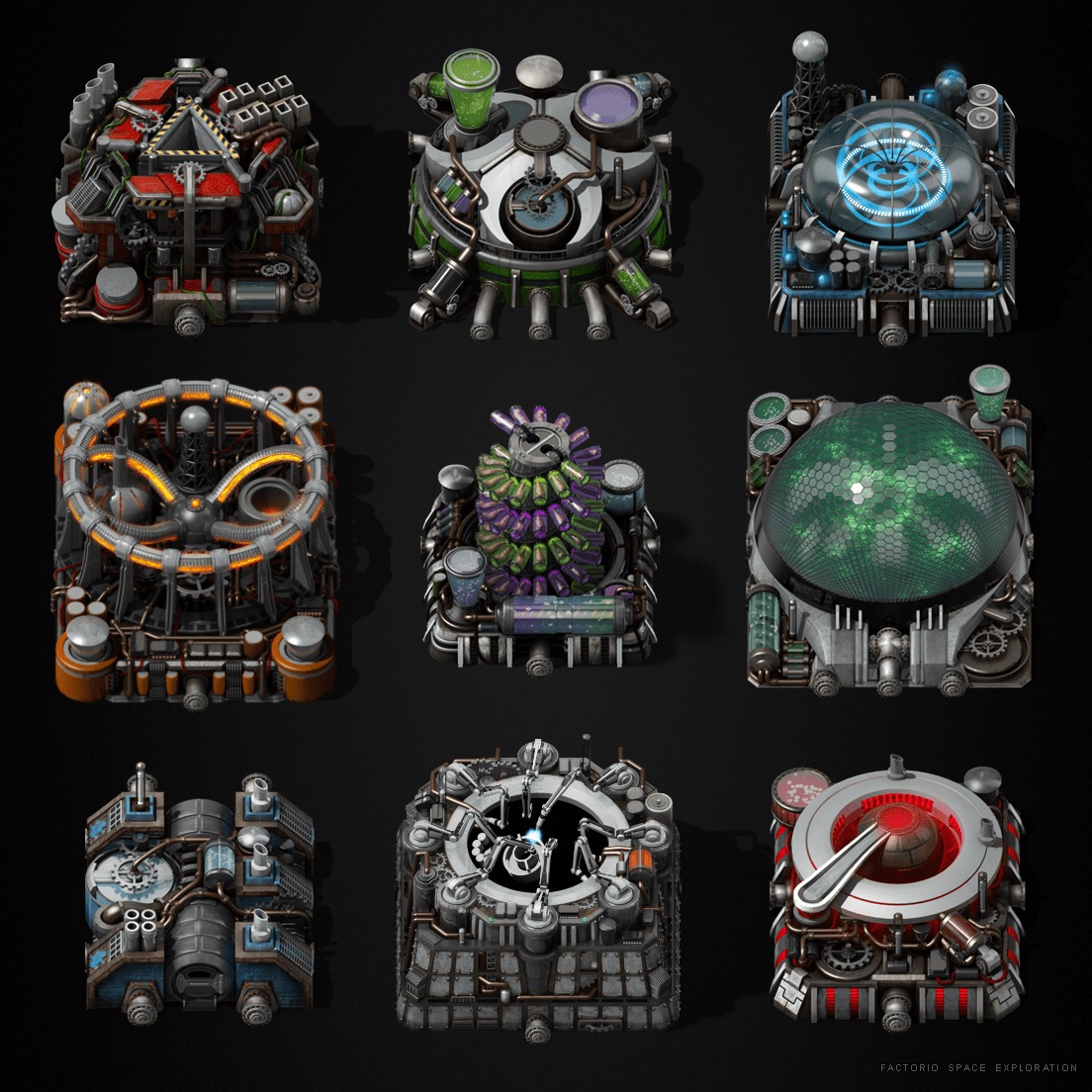 I latch onto spaceships as my main goal, but let’s be practical: to get spaceships I need astronomic science. To get astronomic science I need beryllium. To get beryllium I need to find an asteroid belt. To mine an asteroid belt effectively I need a lot of energy, which is hard to come by because those asteroids are not the ideal environment for my solar panels. It would be easier with better energy tech, and better energy tech needs holmium. I can get Holmium from a nice little biterless planet right next door. Hurray! 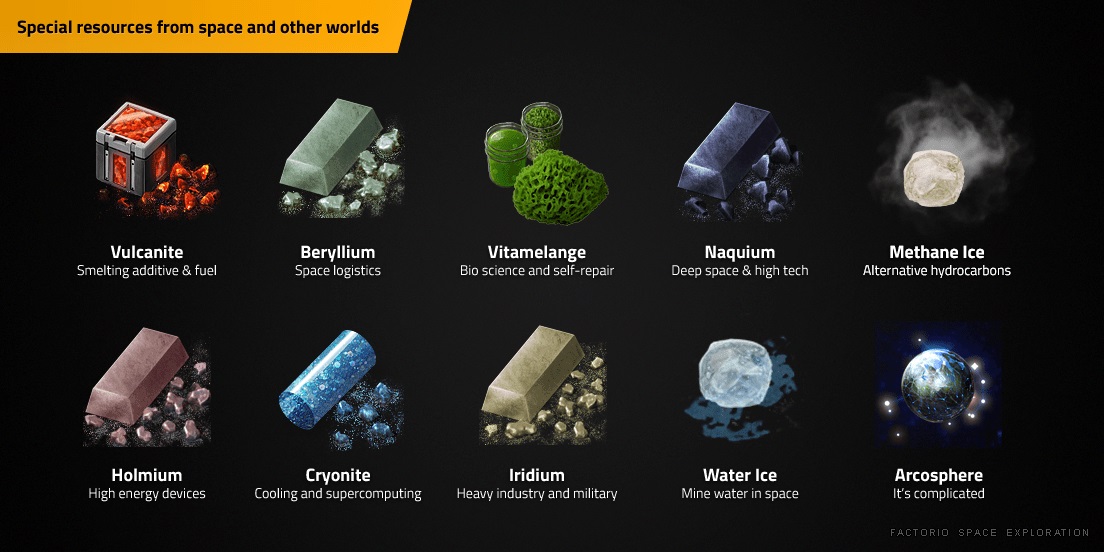 So, I use my fuel guzzling rockets to travel to another planet. This planet has a long day/night cycle and severe wind (RIP robots), but at least it has water and… some sort of ruin to explore? 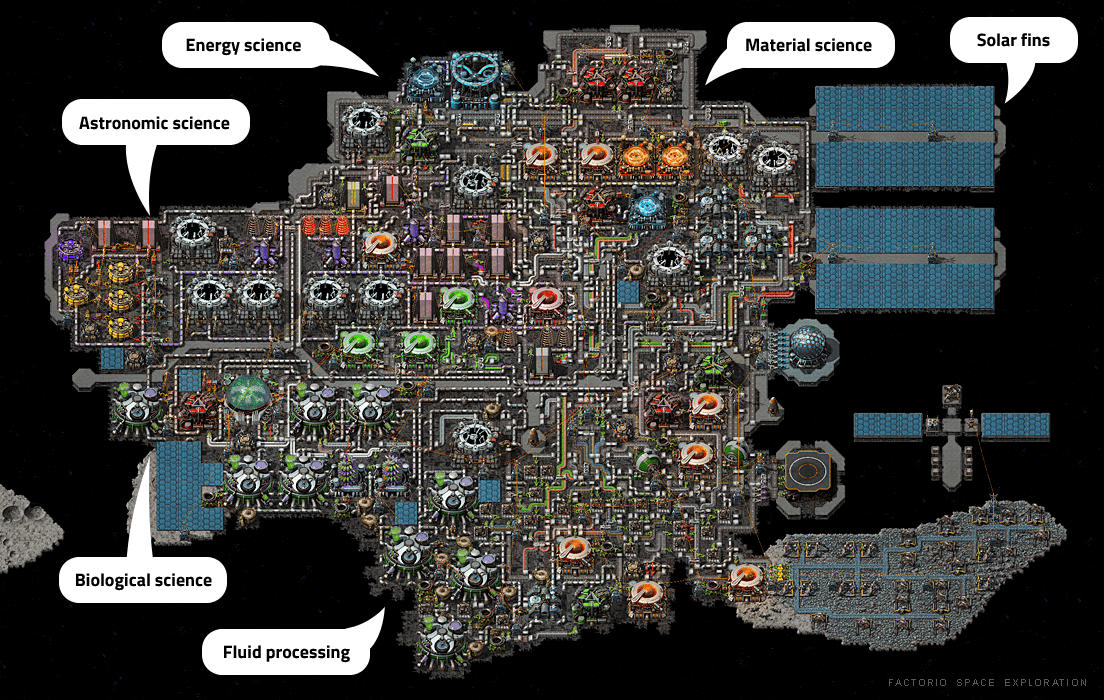 Many hours later, a single outpost has become several as I rocket around the solar system, grinning gleefully at the random names my ship generated for these new discoveries.

My second planet was lacking a few important resources such as iron and… water. Yes water; one of those things you just take for granted until you can’t get it anymore. Fortunately, its moon has iron and water in abundance. Water is not the nicest thing to transport from planet to planet, or moon to planet, because of all the barrels. Sure they’re recyclable, but sending ice is much easier, so next stop: an ice world. How quickly the logistics network grows…

Suddenly, an alert: a rocket from Nauvis has crashed, scattering all the valuable resources it contained everywhere. I tell my construction bots to clean it up; can’t leave those circuits lying around.

I also decided to use delivery cannons to send materials from colony to colony. Interplanetary railguns delivering resources, what could go wrong? It just needs a bit of circuitry to not blow a crater here and there. 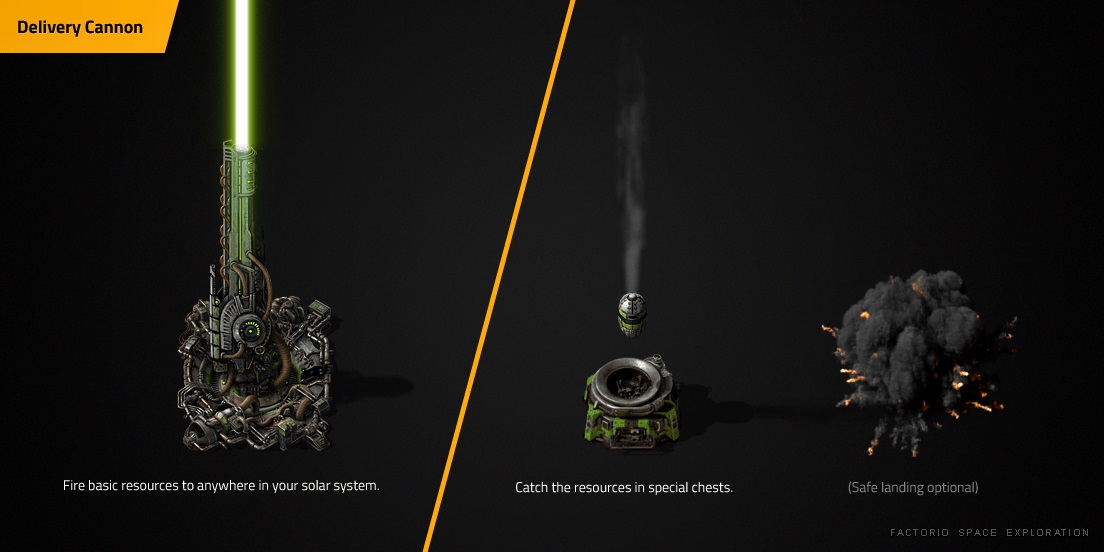 I glance longingly at the spaceship technology, imagining all of the planets I could visit with it.

As my bases expand, the cost of a rocket becomes a seemingly minor expense. The asteroid belt I need for spaceship tech seems less daunting now. Branching out and getting those space trains helped me scale up. After all, it was just a minor detour of around 30 hours, maybe?

Enough of these distractions! I plough forth towards that spaceship tech, setting up an asteroid field mining base and building several huge telescopes for astronomical science. Nothing can stop me. I spend a moment looking at my base and realise that I set my combinators up wrong and have flooded my base with stone by accident. Everything has stopped. I have been stopped by stone of all things. (This will become a running theme.) 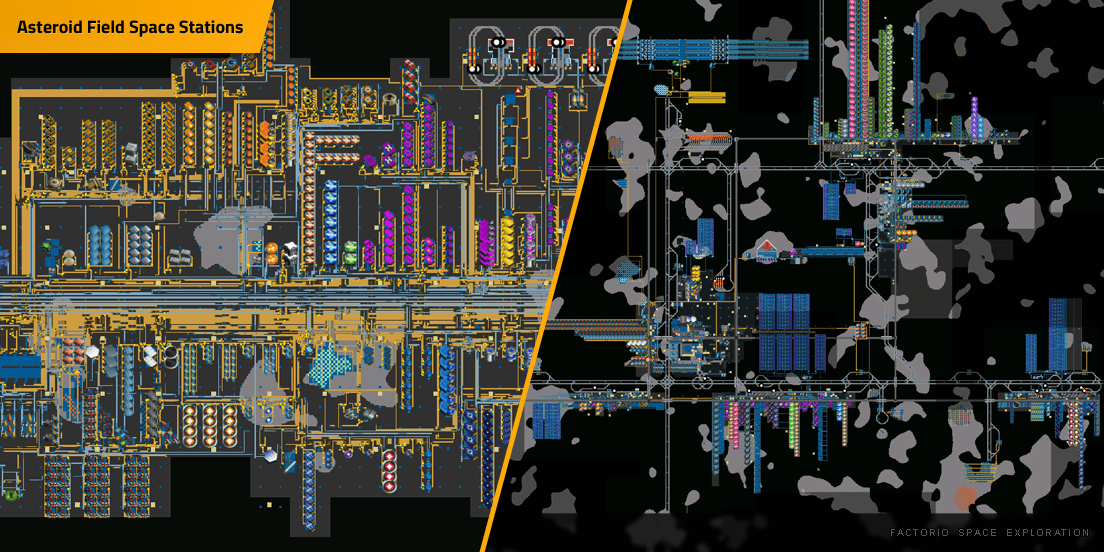 Then the moment eventually arrives. At long last, I have finally researched the glorious spaceship technology.

I look at the building cost and that excitement turns into despair. So many valuable resources for such a small shuttle. But it is MY spaceship. I designed it myself, block by block, like a little rocket-propelled factory, and although it turned out a little bit wonky, it works. I shall name this creation The Penguin. The feeling is exhilarating as I am no longer shackled to Nauvis. I make a countdown machine and launch with much fanfare. The Penguin has taken flight!

Flying towards the space station, suddenly I see asteroids coming towards the ship. Panicking, I shoot the asteroids with my gun in desperation, but to no avail and they keep coming, overwhelming my meagre weaponry. Stop the engines! Too late; a number of asteroids hit the ship and one hits me, killing me. Lesson learned; I will equip my spaceship with guns next time. Maybe fate ordained that a ship named after a flightless bird is destroyed. 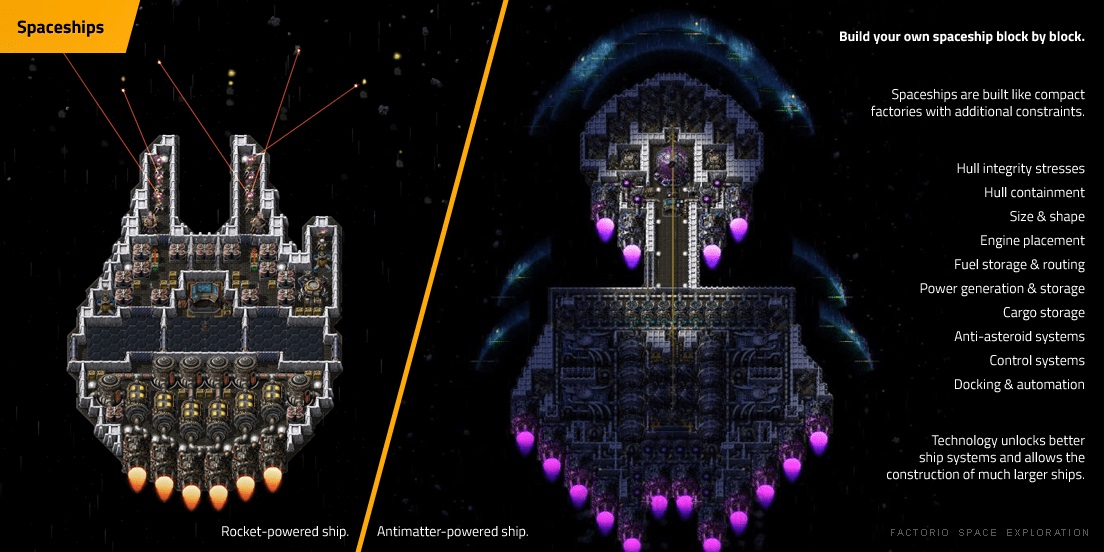 The natives are bugging my home base once again. Perhaps I have neglected my defences in recent days. So many planets, so little time.

A new technology has caught my eye. Energy beaming, or more specifically the glaive. My new spaceship is the perfect tool to set up a space station close to the sun and beam those lovely sun rays down to my enemies. They will be no match for me! 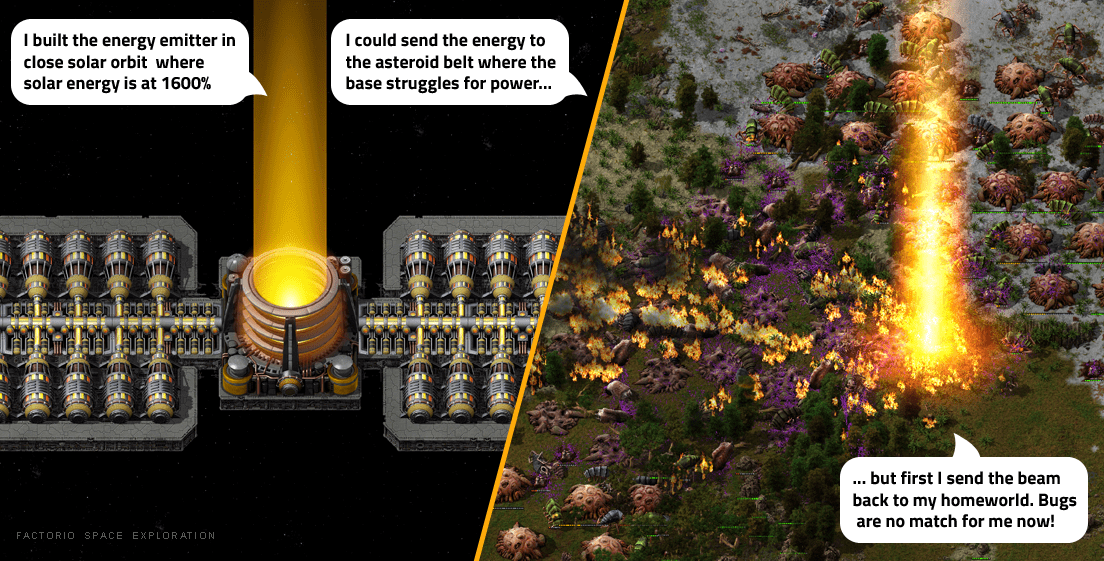 Many hours later, I’ve discovered that I don’t need to colonise new planets in person. If I put a roboport-equipped spidertron in a rocket to a new planet it will pop out of the crash site and can start building. I also have a small fleet of penguin tankers (my Penguin spaceship refitted to be a fluid tanker) on some fully autonomous routes. This really is a game about automation.

My main spaceship is now a massive beast with shield projectors at the front, space trains in the middle, and engineering facilities at the back. It’s time to leave the light of solar systems and make a base in the darkness of interstellar space. To boldly go where no m… wait, what… what is THAT? 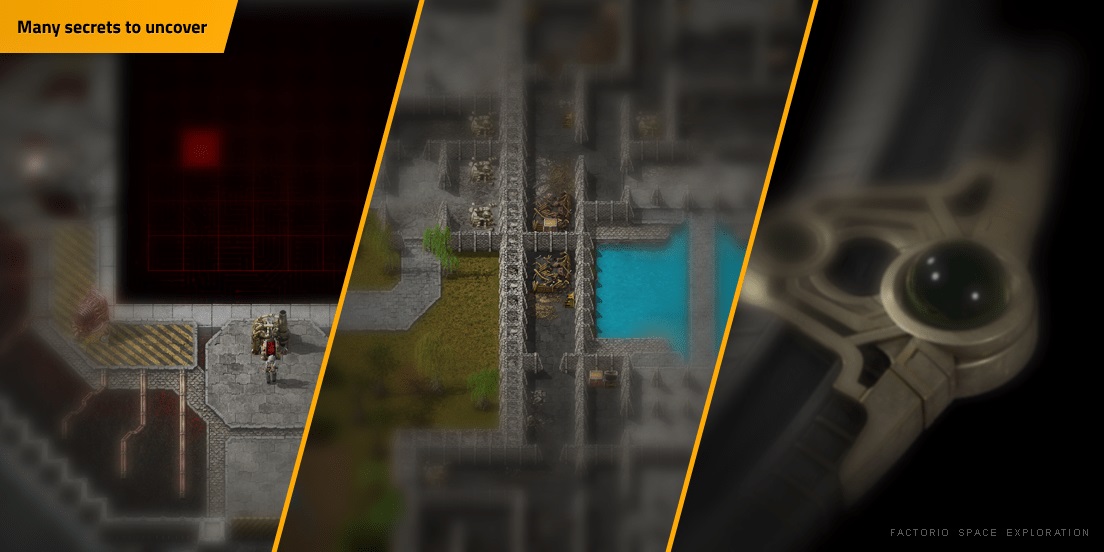 Space Exploration has incredible scope, taking you from a burner-phase pleb to the master of an interstellar empire. You are constantly challenged with massive buildings, logistic problems, and new concepts to work around. The journey is long, brutal, and all kinds of challenging, but it is also rewarding, inspiring, and truly epic. It’s Space Exploration; the calm between the storms.