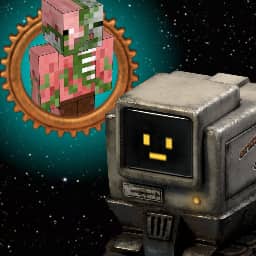 Crossing into the realm of numbers that start with a three, issue #30 has stringweasel bringing a bit of a new format to Alt-F4: an interview, sort of. He talked to YouTube famous person Zisteau about his perspective on various topics relating to this game of ours.

There are many famous names that come to mind when thinking about Factorio. Great players that created amazing content and builds over the years and introduced many people to our beloved game. A great way to commemorate these players, and an excuse for me to talk with some of my favourite Factorio players, is through an interview. Hence the start of a new series of articles (hopefully!) - The Nauvian Perspective. To start us off, I would like to talk about a name that has helped shape Factorio and its community for a long time: The YouTuber known as Zisteau. I reached out to him to see if I could ask him a few questions, to which he replied “yeah sure”.

Now, who is Zisteau? He is better known as Tyler in the less-automatable real world and has been a full-time content creator since 2011 with now almost 350 000 subscribers on YouTube. When he is online, however, he goes by Zisteau, which is his combination of the words jacuzzi and Jacques Cousteau. He has played many games over the years but received his largest following from his active involvement on the Minecraft MindCrack servers, where he was feared for his huge pranks. His content is usually high-effort edited YouTube videos and large scale megaprojects, all while maintaining a relaxed sense of humour and always having fun. It’s not uncommon for him to glance over tens of hours of work in his videos, only to spend the rest of the video nonchalantly on a meme.

In November 2014 he released his first Factorio video on YouTube after playing it for 70 hours offline. Asking where he first heard about Factorio he mentioned: “I saw my friend Sevadus streaming Factorio on Twitch sometime in 2014. I bought the game shortly after that”. Since then, he played Factorio periodically, focusing on various projects and modpacks. He has spent much more time in Factorio than most players and his playtime in “total is nearing 2,700 hours”. As most of you know, even after many hundreds of hours of Factorio play you can still feel like a total noob. Asking Zisteau when he finally started to feel like a professional Factorio player he mentioned that it “was after 2,000 hours played”, but more on that milestone later.

Over the years he has made great Factorio content, always sticking to high-effort videos condensing many hours of grinding gameplay into short and exciting videos. The series that hooked me first was Factorio Meiosis (which is now featured in the unofficial Factorio Hall of Fame). Meiosis means cell division, which he also referenced in the video description “It simulates the ADP to ATP synthase cycle in the form of hordes of little bastards that like the taste of your fear”, and references how he attempted to lay out his modular base.

You will likely recognise his name from a different series however - his favourite series. The series that made him feel like a professional Factorio player for the first time: “I think I became a complete Factorio player after finishing my 5k science per minute Recursion Recursion base”. This magnificent base started with his earlier Recursion series, and then two years later he successfully condensed an entire 5kSPM factory into a single Factorissimo building. All production was done inside the main building, which contained even more Factorissimo buildings recursively. All smelting, refining, and processing - even nuclear power was done inside. He only allowed himself to import raw resources. And still, Zisteau did not forget about aesthetics, which included the memorable Rainbow Roads which has inspired many other beautiful builds - like The Beehive by Valkhiya. This Recursion Recursion base was truly a work of art, and is likely the biggest factory contained in a single Factorissimo building ever.

Zisteau also spent a lot of time in another factory building game (that may-or-may-not have been inspired by Factorio) called Satisfactory. Here he discovered a brand new method on how to build large scale structures in a matter of minutes that not many people know about, which aided him in his massive projects. Curious, I asked him which game he prefers, Satisfactory or Factorio. He answered: “I don’t know if I can pick a favourite with Satisfactory being so early in development. I do not think Satisfactory will have the same longevity as Factorio if the developers don’t add ways to scale production and streamline tedious building”.

As we know there is a massive difference between how a game plays and how visually pleasing it is. Sometimes beautiful looking games are lacking in gameplay, and sometimes less visual-driven games can result in hundreds of hours of fun. An example of this could be the legendary Dwarf Fortress which he coincidentally also played long ago. I followed up with Zisteau, asking which game he prefers in terms of building and the way you lay out automation, Factorio of Satisfactory? He answered: “Aside from both having conveyor belts they are very different games. Satisfactory is overall a simpler game but is in 3D, so there is a 3D-puzzle spatial manipulation element that Factorio doesn’t have. It is definitely more cinematic when you can have massive skyscraper factories sitting amongst canyons and cliffs, but I don’t think it will ever have the same sense of scale of activity that Factorio can achieve”.

So far it seems like Zisteau really enjoys his time in Factorio. As with any game though, it’s easy to have annoyances with the game, even when you can gladly sink thousands of hours into it. Asking Zisteau what’s his biggest annoyance with Factorio was, he answered: “I don’t have any major annoyance with Factorio. The only thing I can think of is I would like a greater variety of aliens”. Zisteau has spent many gruelling hours expanding his borders through deathworld biter territory, so it seems like he is ready for a bigger challenge. This idea was also brought up when asked what he would like the announced upcoming Factorio expansion to include, to which he replied: “More alien variety. Bio-tech. Spaceships. Subterranean areas”.

Zisteau has been part of Factorio almost since the start. He was even there when DaveMcW made his iconic One Rocket Defence Per Minute base five years ago. However, one of my favourite ways that Zisteau helped shape our community is how he inspired two of the Factorio developers - Klonan and Bilka - to start playing the game in the first place. Asking Zisteau what he thought about this he said: “I was not aware of that. That is pretty cool.” This is likely why the video description of the series that inspired Klonan is now featured as a quote on the official Factorio website.

Factorio is a super duper awesome game where we use conveyor belts to shoot aliens.

To end this interview, I posed a serious question to Zisteau - who is the real bald guy of YouTube? Him, being Zisteau? Or SethEverman, the self proclaimed bald guy? Not missing a beat he replied: “I’ve just checked worldwide statistics, and it appears that there are at least two bald humans on planet Earth.” I could almost see that nonchalant smirk on his face.

On that note, I hope you enjoyed this as much as I did and gave you a small glimpse into this YouTuber’s time in Factorio. He has been a great influence on our community and will likely continue to be in the future! In the words of Zisteau: “See you next time, and bah-buy!”