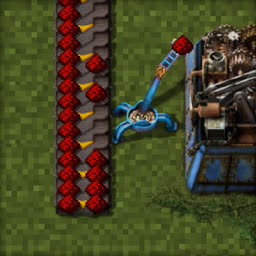 This week’s issue #34 has Nanogamer7 start on a potential new series of articles about the very origins of Factorio. This week features a dive into potential inspirations for this masterpiece of a game, with a diversion into game design here or there. Stay awhile and listen!

The Best of Its Genre – Factorio Origins

We’ve all heard of Factorio’s insanely good Steam ratings, consistently rising to second place just behind Portal 2. Obviously many others will try to imitate this success in the automation genre, but where did Factorio get its inspiration from? Was it the first game solely designed for automation or merely the first one to do it successfully? That’s what I’ll be trying to answer in this first article of a (probably) multi‐part series.

The first difficult question we’ll have to answer would be what automation even is. In ‘Cities: Skylines’ for example, you are building your city which then (theoretically) functions autonomously. The difference here is that your job isn’t to automate – the cars spawn out of nothing, choose their destination, and get there by themselves, once you build roads – but to manage the whole situation. In vanilla Minecraft on the other hand, you are the one to even make the automation possible – just with pistons and hoppers, instead of inserters and belts. By comparing these two examples, one could loosely define the automation genre as “making stuff that makes stuff”.

That definition is still a bit vague however: As someone who didn’t play it, would Dwarf Fortress’ gameplay of enabling dwarfs to make stuff fall under my definition of automation? For the purposes of this article we’ll assume it does. No matter whether we are talking about electronic circuits, wheat and seeds, or wooden menacing spikes, it all counts. Maybe someone else will explore Dwarf Fortress further in the future *wink wink*.

There’s a mod for it

I’ve already touched on Minecraft as an example for automation, but its vanilla capabilities don’t even begin to compare to the possibilities of modded Minecraft. Its popularity boom in 2013 brought many technical players together to form one of the largest modding communities ever, which could just have made it the most popular example of automation. But that got me thinking: With mods in the likes of Buildcraft, IndustrialCraft, and Redpower featuring a very heavy focus on industrial machinery and automation, and release dates well before Factorio’s development even started, could that have been an inspiration for Factorio?

So I went on a search (which definitely wasn’t easy, seeing how active some of Wube’s devs are across Reddit, Discord and the forum), and after sifting through a few interviews and going to the wastelands of Google page 2, I finally found something: An old forum thread from March 2014, confirming Buildcraft (or IndustrialCraft, according to another interview) as the main inspiration to Factorio. According to kovarex, he saw the potential in that concept while playing the mod, and wanted more of it, putting his own spin of course.

While I had hoped to find an answer, I for sure wasn’t expecting to find such a direct one. Having that out of the way, though, we can definitely speculate a bit more about what brought Factorio to where it is today.

There is a principle that game design designers should follow which is something along the lines of “follow the fun”. It means that you shouldn’t try to force a game to be something it isn’t, but rather develop the ideas that are enjoyable. (If you are interested in that concept, I’d commend this video by GMTK.)

While examples for that statement often include dramatic changes like Ape Out went through, it still applies to games that don’t shift direction that drastically. Let’s take Factorio itself as an example: Originally the game had multiple pickaxes – a wooden one, which you could then craft into a better one out of stone, and then into the iron pickaxe we had for such a long time. This was clearly inspired by Minecraft (which is confirmed to be the case by the devs), but having so many items about manual mining in a game about automation gives you the wrong idea of what the game is about.

So they simplified it by limiting the player to only iron and steel pickaxes, but that still leaves them with two items specifically for manual mining. Realizing this, they removed pickaxes completely from the game in 0.17.0, and with it all focus on the unfun manual labour.

This whole approach is a double-edged sword however; you might know the famous quote “Given the opportunity, players will optimize the fun out of a game.” from GD Column 17, often mentioned in regards to blueprints. Wube takes great care of this problem though, as seen in for example this AMA on Reddit.

You might ask yourself why I dove into the concepts of game design at all? Well, I believe it is an important step in understanding how Factorio came to be. I believe that once the core gameplay concept of a game is clear – which is what Factorio started out with – it’s just a manner of fitting features to it. Automation? That sounds like the industrial revolution when factories made heavy use of belts. Need something to get things off the belts? How about inserters, replacing the human doing that step. You get the point. A game doesn’t need inspiration from other games to develop its ideas further.

While I originally tried to find Factorio’s “predecessor”, my search left me to conclude that it’s mostly an original work with only the core gameplay loop having external influences, which probably is a more rewarding answer than “we have Factorio and its precursor Nostalgorio”. That being said, there have probably been some automation games in the past, and Factorio definitely had a big influence on some more recent games. Maybe we can explore this further in a future article, maybe even how Factorio inspired more than just games.