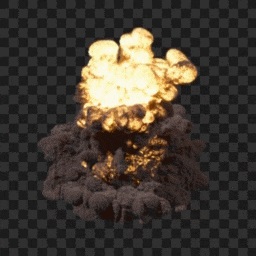 Welcome to the fifth issue of Alt-F4, and we’re still picking up steam! Many contributors, translators and techies are being busy bees helping to further the project, which is just great. If you want to join in the fun check out the Contributing section at the end of this issue. In actual news, this week pocarski makes the case for allowing landfill to be dug up again, Romner follows up their submission from last week by talking about obliterating biters with the power of fusion, and Dr.MagPie takes us to the Factorio Zone!

A small rant about landfill

“Your mistakes have no cost but time”, says u/talrich’s quote on the Factorio subreddit. And yes, for almost anything you do in this game you can undo your actions at any point. Indeed, it’s true for everything you can build except for one thing: landfill. While placing any other entity or tile in the wrong spot costs only a moment of your time, doing that with landfill not only means you irreversibly lose the quite expensive landfill itself, but also leaves you with an awkward landmass that you didn’t want and now can’t remove. In this article I present the issues landfill’s irreversibility creates, and hopefully the benefits of making it removable will become clear to you, dear reader.

Whilst not being able to dig up landfill was perfectly justified in the pre-0.17 days, back when landfill was literally just the default grass-1 tile, in 0.17.10 it was separated into its own distinct tile. Along with allowing landfill to be placed by bots and included in blueprints in 0.17.0, this set up the perfect condition for also removing landfill, or at least allowing us to do something to it which can’t be done to other tiles.

Each piece of landfill requires 20 stone to produce, meaning an entire 800k stone patch is only enough to landfill a square 200 tiles on a side, which is really not that much considering the size of many builds. A long time ago I made a nuclear reactor design that required a whopping 2,700 landfill, and it only produced 480 MW! There isn’t much talking needed to describe the pain of placing a blueprint comparable to that one tile off at first and having about 50 landfill (literally 1,000 stone!) just sitting there unused and not available to you anymore.

Now, since I mentioned nuclear power, time to talk about what allows most big reactor builds to work: internal offshore pumps. These are offshore pumps, included in the blueprint itself, which rely on the shape of the landfill island to pump water properly. If you accidentally drag the blueprint while placing you’ve already ruined the entire landfill base. In the best case, you can just move some pumps and it will still work, and in the worst case you’ve filled in a critical hole and now the entire platform is unusable and has to just sit there empty and be a massive eyesore.

On a related note, although you can landfill around an existing offshore pump, that pump can’t be placed back if it’s ever removed. This means that if you ever have to place anything directly next to an offshore pump, you have to place landfill there first, since offshore pumps can only be placed if surrounded by water. That means you have to commit to the pump being there, and if you ever remove it you’ll have to do some intense head scratching to figure out how to route the water from a different pump.

Landfill is the only placeable object in the game that requires full commitment from the player. As someone suffering from commitment issues, I avoid placing landfill in freeplay at all costs and, personally, I don’t think this is how any game mechanic should be treated. Letting us dig up landfill will absolutely improve the game (and in the rare case the player removes landfill under themself and dies it’s gonna be their own fault). Of course, there is always the “if you want removable landfill, just install some mods” argument, but I feel like that goes against Wube’s philosophy of making a polished game.

After I made the Realistic Fusion Power mod featured in last week’s issue, I wondered whether it would be possible to use fusion for something other than power production. Well, thermonuclear bombs are already a thing. Pure fusion bombs are theoretical, but I added them anyway. I’ll let the gifs do the talking:

The order goes vanilla nuke → thermonuclear bomb → pure fusion bomb. The first gif shows vanilla-like explosions, while for the second one I created kind of a meld of MIRV and vanilla 1.0’s explosions. I personally like the MIRV-like ones more, but if you don’t there’s a setting for each bomb. There’s also a setting to change the strength of the screen burn if it’s too much for you.

The antimatter bomb is only launchable as an artillery shell because there’s no way you could survive after launching it from a handheld rocket launcher. Pure fusion and antimatter weaponry also have no critical mass (unlike fission and thermonuclear), which means they can be scaled down to practically any size. That includes:

(There isn’t an antimatter rocket/cannon shell gif because it makes an explosion the same size as the pure fusion bomb.)

And did I mention that all the nukes have artillery shell counterparts? Yes, even the vanilla one.

Also, you know flamethrowers, right? Well, why throw thousands of degrees hot flames when you can throw millions (or even billions!) of degrees hot plasma?

And yes, there’s a plasma thrower turret too. They use either D or He-3 plasma (He-3 deals higher damage because of the 4x higher temperature). (Yes, I know plasma is just hot gas that would cool down very quickly, so in reality it would just be a fart thrower. But with the power of Science™ you managed to make it, well, not do that.)

Of course, all of this isn’t cheap — there are several technologies to research, costing 10k (plasma throwers), 20k (thermonuclear bomb), 50k (pure fusion bomb), 100k (small scale fusion weaponry), 500k (small scale antimatter weaponry) and 1M (antimatter bomb) science each. (For comparison, the vanilla nuke needs 5k.) Their recipes are also quite expensive: a single thermonuclear bomb needs 10k of the deuterium-tritium mixture + 25 u-235. That is 2 TJ worth of fusion fuel and 2 TJ of fission fuel. The pure fusion bomb needs 20k of the deuterium-helium-3 mixture, that’s 20 TJ worth of fusion fuel. The antimatter bomb uses 500 antihydrogen. That’s ~386 TJ. (The vanilla nuke has 2.4 TJ worth of fission fuel.)

RFW is meant to be used against powerful modded enemies (like Rampant’s), but you can of course use it with vanilla too (assuming you have Realistic Fusion Power installed; it’s an addon to it after all).

Always wanted to play on a Factorio server with your friends, but don’t have the funds to afford one? Well, there is an option available to you: Factorio Zone! It allows you to host your own, free server.

The service is hosted on AWS and WhiteFang, the developer of the service, has optimized it and dropped the costs down. So, at the moment he does not mind covering costs for running it as a contribution to the Factorio community.

Using it is pretty straightforward. You just go to factorio.zone, where you can upload your save and mods. Factorio Zone does not update mods for you, so you will have to do that manually. Don’t worry about accidentally closing the tab with the server; it creates a Unique User ID (also known as a token) which is saved in your browser’s local storage. When you open Factorio Zone next time it will remember your save and mods.

As it’s a free service, there are some limitations in place. If a server has no players on it for an hour, the service will shut it down and store the save file. If a player is idle for 30 minutes then they’ll be kicked from the server. When there are no players on a server, it’ll pause to protect your base from being overrun by biters.

It’s worth mentioning that Factorio Zone estimates the server size to use based on the map and mods, which means it’ll scale with your progression (between restarts) and should work for most saves most of the time. There are a few cases it doesn’t estimate correctly, but I personally did not encounter any issues with it.

Also, there are some semi-hacky ways to share your session with your friends such that any of you can start or stop the same server at any time. For that, you just need to extract and share the above-mentioned token. To do that, you can use this tool. There also is a great tool that will help you to prepare mods to be used on Factorio Zone. It does some optimizations to the file sizes like removing assets which will not be used by the server anyway.

If that sounds interesting give it a spin and consider thanking/supporting the developer, WhiteFang, for providing this to the community for free.

As always, we’re looking for people that want to contribute to Alt-F4, be it by submitting an article or by helping with translation. If you have something interesting in mind that you want to share with the community in a polished way, this is the place to do it. If you’re not too sure about it we’ll gladly help by discussing content ideas and structure questions. Join the Discord to get started.